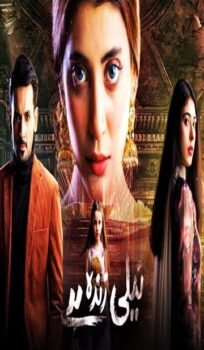 Below is the episode-wise story of the drama ‘Neeli Zinda Hai’. First, let’s look at the characters played by the cast:

Married to Aman, Sumbal is a housewife who has just undergone the demise of her second baby. She is struggling to open up to her husband Aman, who has just returned from Australia after hearing the news of his son’s death. Aman tries to make efforts to reconnect with his wife, Sumbal, and his mute daughter, Minal. Aman’s mother, Mehrbano, tries to keep her son away from Sumbal. Aman has been visiting once a year for the past six years. However, the loss of his baby is an awakening for Aman who tries to set everything straight. He notices his mother’s behavior and decides to move Sumbal into a separate house. Taken aback by her son’s actions, Mehrbano accuses Sumbal of driving away her son.

The couple shifts into a new house where they experience a series of mysterious happenings. Sumbal becomes suspicious when she sees how well-kept the house is. Minal finds a doll and keeps it. Later on, the doll disappears and reappears mysteriously.  Mehrbano takes out her anger on Faheem by throwing him out of their bedroom. Rakshanda, Mehrbano’s friend, takes her to a ‘peer baba’ who promises Mehrbano to get back her son and break Sumbal’s black magic over Aman after she brings him any gold item of Sumbal.

Sumbal finds Minal acting weirdly on various occasions. Mehrbano takes Sumbal’s gold bangles for the ‘Baba Ji’ who tricks her into thinking that Aman and Mehrbano are under the influence of black magic. Later on, Aman visits, and Mehrbano taunts and scolds him for choosing his wife over his family. In Aman’s absence, Sumbal scolds Minal for messing with her stove. As Minal runs away, Neeli shows up out of nowhere and slaps Sumbal, who finds herself in a parallel universe; where she follows the voice of a crying baby into a room where Neeli is sitting. Sumbal tries to take the crying baby away from Neeli’s arms when Mehrbano shows up and strangles Sumbal, accusing her of stealing her son.

Aman tells Sumbal that he found her fainted on the floor and Minal was crying beside her, so he took and settled her in bed. Aman and Sumbal discuss Sumbal’s dream to be meaningless while Neeli pats a sleeping Minal. Sumbal keeps a woman named Nagina as her maid who tells Sumbal that her husband divorced her after she had a miscarriage, and she desperately needs a place to stay, so Sumbal sympathizes and keeps her. Aman instructs Sumbal to ask for Nagina’s ID card for security reasons when Nagina eavesdrops outside their bedroom. Nagina talks to a man, a ghostbuster, who wants to trap Neeli, i.e. why he sent Nagina to Sumbal’s house. Nagina gets slapped by Minal who lies when Sumbal confronts her. Also, Sumbal yells at Nagina weirdly, and she turns out to be Neeli disguised as Sumbal.

Mehrbano takes out Rs. 50,000 from her and Aman’s joint account and he comes home asking. Aman’s father, Mirza asks Mehrbano about the whereabouts of the money and she lies. Suspicious, he follows her to the baba’s house and finds out what she’s been up to. Nagina visits the ghostbuster, Dilawar, and explains everything Neeli’s spirit did with her. Dilawar tells Nagina that he will capture Neeli because she caused him to lose a leg and he ended up stranded in the cemetery. Sumbal sees flying cabinets in the kitchen, then she sees Minaal playing catch alone; she tries to stop her and gets pushed by an unseen force. Sumbal tells Aman that she feels an eerie feeling in the house and hears crying baby noises and he tells her to see a psychiatrist. Later on, Mirza comes to meet Sumbal and tells her about Mehrbano’s actions.

Sumbal stops Aman and tries to show her the bloodstain on her bedsheet. However, when she opens up the sheet there is no bloodstain, so Aman goes to the psychiatrist to discuss Sumbal’s mental health. The psychiatrist tells Aman that Sumbal’s subconscious mind is doubtful about him leaving her alone again, i.e. why she is presumably seeing mysterious figures. Neeli takes Minal to a closed storeroom and explains her story as to how she died thirty years ago and since then no one has spoken to her due to fear. She starts calling Minal as Mannu, the name of her own daughter. Mehrbano continues to fall prey to the Baba who tells her that he has sent some forces to conquer Sumbal’s evil black magic. He gives Mehrbano a talisman stating its powers would bring Aman back on track. Aman comes to visit and Mehrbano finally meets him happily. She gives Aman tea with something mixed in. Faheem sees it and threatens to expose her. As everyone sleeps, Neeli looks at her old trunk of clothes and remembers her wedding night. She gets married to Pervaiz but on the night of her wedding, there is another man present in her room whose advances scare Neeli.

Neeli recalls her wedding night with Pervaiz, and that a random man makes advances towards her. Nagina tries to trap Neeli by using the pins that Dilwar had given to her and she ends up scared in her sleep. Aman hears Nagina screaming and wakes her up who continues to scream so Aman ends up slapping her into reality. Sumbal wakes up too and hears from Nagina about a female spirit in the house. Sumbal confronts Aman who says that Nagina was having a fit and that she’s crazy. Aman gets angry and decides to throw her out of the house but Sumbal rescues her. Nagina informs Sumbal about Minal seeing the female spirit, so she tries to confirm. Sumbal makes Minal count all members present in that house and she counts Neeli as well. Neeli shows herself to Sumbal, destroys things in the study, and locks Sumbal upstairs with Minal. Aman unlocks the door and finds Sumbal unconscious. She reacts after waking up and Aman tells her to take her pills. Later on, Aman’s father and sister come to visit and Sumbal remains silent when Aliya asks her the reason behind her sadness. Meanwhile, Aman’s plot gets disputed and he goes to settle it.

Faheem warns Sumbal about Mehrbano and she thinks Mehrbano is responsible for Neeli’s actions. Mehrbano fights with Faheem for going to Sumbal’s house. Neeli takes Aliya’s form and taunts Sumbal. Sumbal refuses to go to Aman’s old house for dinner, and Aman fights with her. Neeli guides Minal to remove the trap that Nagina set. Nagina intimates this to Dilawar.

Sumbal sees Neeli and tries to tell Aman, but afraid of the circumstances, she hides this from Aman. Aman gets in a fight with Ajmal; a man trying to steal his plot by force. Mehrbano tries to send her friend, Rakshanda, to Sumbal’s place to inquire whether she’s pregnant or not. Aliya calls Sumbal and snitches on Mehrbano’s plan. When Rakshanda visits, Sumbal taunts her. Nagina scares Sumbal with black magic items.

Neeli ignites a fire and Nagina puts it out. Aman blames Sumbal for neglecting her duties and storms out. He returns late and Neeli takes Minal to Nagina’s room. Finding Minal with Nagina, Aman gets furious at his wife. Sumbal and Nagina try to meet Dilawar but back out. Later, Neeli tries to drown Sumbal and Aman expresses that he made the wrong decision of moving out.

The goons attack Aman’s house for reporting an F.I.R against them. Aman goes to the police station. Mehrbano gets a talisman, visits Aman’s house, and hides it in his bag. Sumbal accuses Mehrbano of using black magic. Mehrbano fights with Faheem. Nagina doses Sumbal and tries to take Minal to Dilawar, but Neeli stops her. Dilawar saves Nagina and meets Sumbal.

Dilawar informs Aman everything about Neeli but he doesn’t believe him. Neeli takes Sumbal’s form and apologizes to Minal. Aman takes Minal to his parents’ house and Mehrbano refuses to keep Minal. Aman and Minal get attacked late at night by the goons who kidnap Aman. Neeli saves Minal. Mehrbano goes hysterical and accuses Sumbal of ruining Aman’s life.

Sumbal pays the ransom to the kidnappers who then release Aman. She takes Aman to the doctor while Nagina calls Dilawar home. Neeli talks to Minal who responds to her verbally. Neeli transforms into Minal, tricks Dilawar, and ultimately kills him. Mehrbano informs Aman about selling her house and terms Sumbal ungrateful. Minal goes missing and Sumbal looks for her.

Mehrbano emotionally blackmails Aman. Neeli instructs Sumbal to tell Aman that Mehrbano can’t stay in their house. Sumbal does as she was told and then faints. Neeli traps Sumbal and takes her form to misbehave with Mehrbano and Aliya. Mehrbano snitches to Aman who gets angry when he finds out and threatens to divorce Sumbal for her behavior.

Aliya convinces Mehrbano to meet Danish’s family. Neeli takes Nagina’s form and misbehaves with Mehrbano only to blame Sumbul afterward. Mehrbano gets attacked and thinks Sumbal’s black magic has backfired. Sumbal scolds Nagina infront of Mehrbano. Danish, Aliya’s lover, comes to Sumbul’s house with his family. His father gets startled upon seeing the house and refuses to enter. He gets trapped in the car.

Neeli attacks Danish’s father, Nawab who is admitted to the hospital for head injuries. He lies that he slipped and fell. Nawab refuses Mirza to marry Danish to Aliya. Aliya cries and blames herself but Sumbal consoles her. Neeli visits Danish and asks him to reveal to his wife what truly happened. Danish promises Aliya that he’ll keep trying for their marriage.

Aliya requests Sumbal to talk to her father-in-law. Sumbal visits Nawab who sees Neeli repeatedly. Sumbal runs into the real Nagina who reveals that Neeli has taken Nagina’s form. Sumbal coerces Nagina to go back to her house to prove that Neeli exists and in return, she’ll help Nagina locate her child. Mehrbano overhears Minal talking who slaps her and laughs.