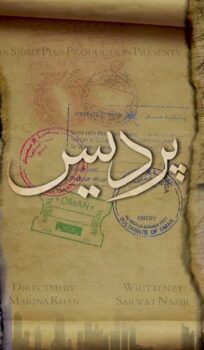 ‘Pardes‘ is the story of Ahsan and Zubeda’s sufferings. Zubeda has to go through intense trauma when her husband Ahsan goes abroad for a job. She battles with the agonies inflicted by the ones closest to her and has to take care of her children as well.

Before proceeding to the episode-wise story of the drama, let’s first look at the characters played by the cast:

Ahsan and Zubeda belong to a middle-class family where Ahsan is the sole breadwinner. His brother Asim is not interested in the job and wants to marry his cousin Noshi. Their mother, Mumtaz keeps forcing Ahsan to move abroad to improve their financial condition. Noshi’s father fixes her alliance and Asim reaches her home to talk to her.

Asim and Noshi are caught by her father and he asks his mother to arrange marriage in two weeks. Amidst all haste, Zubeda is forced to give her only gold set to Noshi. The elder sister of Ahsan is annoyed as her husband demands a bike and all money is spent on Asim’s wedding. After some days of marriage, Noshi argues with Asim not to apply abroad as she is pregnant.

Ahsan finds himself helpless when he has insufficient cash to treat his sick child. He decides to apply abroad and finds a job in Muscat. When he leaves, Zubeda faints and it turns out she too is expecting. Mumtaz gets worried about the growing expenses due to an increase in the family members. Noshi is irritated at Asim for taking Zubeda to the hospital.

Noshi cleverly hints Zubeda to not involve Asim in her matters. Ahsan sends money to his family but Mumtaz keeps it all oblivious to the fact that Asim has stolen a small amount from it. Aliya talks to her mother about caring for Zubeda who on her own has gone to a dispensary in a critical condition. On her way back, the neighbor takes Zubi to her house to talk to Ahsan on call.

Ahsan is elated to know about Zubi’s pregnancy. The family leaves for Mazhar’s house and enjoys a feast there while Zubeda and her daughter have nothing to eat back at home. Noshi creates a scene when Zubi feeds an apple to her daughter. Aliya asks her mother not to mistreat Zubi but she is least bothered. Mumtaz receives an earful from Noshi when she asks Asim to contribute to household finances.

Ahsan sends gifts for his wife and children, pissing off Mumtaz and Noshi. Aimen misses her father terribly and her behavior starts to turn miserable. Zubeda in her last months of labor keeps working non-stop while Noshi enjoys her life. Mumtaz leaves behind Zubeda as Noshi goes into labor. Aliya sends Zubi with the neighbor to the hospital too. Both women give birth to baby boys and Zubi cries remembering Ahsan.

Zubeda misses Ahsan after delivering the baby. As the family comes home, Mumtaz gets worried about Zubi’s situation. Ahsan is thrilled at the birth of the child and names him Zaid. Noshi is angry at the thought of Zubi also giving birth to a boy. Ahsan tries to take holidays but in vain. Zubi terribly misses Ahsan and wants him to come back but her mother-in-law scolds her for trying to disturb their financial progress.

Aliya argues with her mother for giving Zaid’s stuff to Noshi’s son, Nomi. Zubi faces a hard time with managing her kids and house with sick health. Noshi accuses Aimen of stealing Nomi’s toys and is beaten by Zubi. Ahsan surprises everyone with his return and Aliya is irked as her mother cleverly gives her the necklace Ahsan bought for Zubi. Zubi begs Ahsan not to leave her again but he explains to her about the need for work.

Ruqaiya explains the hardships faced by Zubi to Ahsan who refuses to return to Muscat which bothers the whole family. Everybody turns against Zubi and acts rude to her. Nabeela asks for her share in the house. Ahsan is advised by a friend to return and call his family to Muscat as well. He changes his mind and returns.

Ahsan sends money to Zubi separately which irks his mother and she keeps taunting Zubi for the same. Zubi meets her cousin, Mubashir, and is elated. She talks to the family about Aliya’s disapproval of marriage as she likes another guy and quite a scene is created at dinner. Aliya is engaged forcibly. Mumtaz refuses Asim to proceed with the passport formalities of Zubi. Asim buys a car with Ahsan’s money but Zubi and Aimen don’t get a chance to ride it.

Mubashir visits Zubi and the family is suspicious of her. Aliya’s nikkah takes place and Asim meets Mubashir. He spots him with Zubi outside school as he tries to help her and Zubi gives a befitting reply to Asim when he instigates Mumtaz against her. Zubi tries to tell Ahsan about Mubashir but a network problem causes a disruption.

Ahsan comes home to clear the accusations on Zubi and decides to take her and the kids with him to Muscat. Mumtaz apologizes to Zubi when she is paralyzed and she decides to stay back to her responsibilities as everyone else refuses. Ten years pass and Aimen grows up into an annoyed and arrogant girl while Zaid is uninterested in studies and has adopted bad company.

Aimen misbehaves with Zubi as she always overlooked her children. Aliya complains to Mumtaz about her ill behavior with Zubi which turned into karma ruining Aliya’s life. Mumtaz apologizes to Zubi and dies. Seven years later, a decent man in Aimen’s university tries to talk to her but she gives him an earful. Aimen is taken aback as Ahsan visits home but she doesn’t greet him.

Ahsan is hurt when his children don’t pay attention to him. He is worried to find a pack of cigarettes in Zaid’s messed-up room. Ahsan’s health keeps deteriorating. Noshi suspects that Nabeela is to fix Aimen and Salman’s marriage soon. Aimen befriends the man who talked to her in the university and is moved by his words about father’s love.

Nabeela brings Salman’s proposal for Aimen. Ahsan asks for his share in Asim’s business but he retorts back and refuses him to ever be his partner. Aimen laments before her parents how the whole family always took their benefit and left them empty-handed in the end. She requests Zaid to leave the bad company and come back to life.

Ebad’s mother warns him not to get too close to Aimen. Aiman agrees to Salman’s proposal upon her father’s insistence. She argues with Salman’s father when he asks for dowry. Nabeela is surprised to find out about Salman’s posting to Dubai. Zaid steals money from Noshi to buy drugs.

Ahsan’s health deteriorates and doctors suggest a surgery with a 50% chance of survival or Ahsan would lose his life. Aimen suggests selling the house and treating her father. Ebad tracks down Zeyd and advises him to get on the right track. Noshi pressurizes Ahsan to stop the family from selling the house.

Ahsan gets an attack when Aimen refuses marriage upon hearing about Salman’s posting. Noshi acts about her efforts to save Ahsan’s life and Aimen spoiling everything. Aimen requests Ebad to act, asking her hand in marriage to fulfill her father’s last wish. Ahsan is glad as he had met Ebad before. Ebad convinces his mother to help Aimen.

Ahsan dies soon after Ebad and Aimen are bound in nikkah leaving his wife and children distraught. Ebad’s mother turns out to be the co-wife of Ruqaiyya’s niece. Noshi is delighted at the news while Aliya is worried for Aimen. Ebad’s mother, Rahila suggests him breaking the alliance as Ahsan is dead.

The family considers breaking the alliance and getting Aimen married to Salman to save their money. Aimen and Ebad don’t want to end their relationship. Both are robbed while Zaid is hurt. They spend the night in hospital unable to contact anyone. Asim and the rest are furious and talk ill about Aimen while the couple stands worried for Zaid.