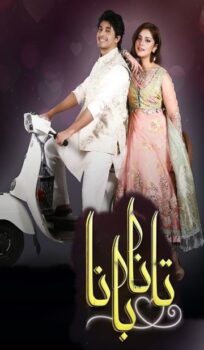 Taana Baana focuses on the families of Zain and Zoya. Zoya has just graduated and wants to pursue her master’s degree. Her mother however prefers her marriage first. Zain’s family becomes jubilant when they hear about Zoya’s proposal for Zain. Zain’s mother, Fauzia complains of not having power in deciding family matters including her son’s marriage. Zain who has a firm belief in horoscopes is impressed by Zoya’s beauty. Shahid and Zeb-un-Nisa share a romantic bond despite thirteen years of marriage where Shahid is always ready to serve his wife.

Both families meet and Fauzia becomes critical of the new family. When they both meet in solitude, Zoya asks Zain to refuse the proposal as she just wants to focus on her studies. He however has other plans as he nods to the proposal later.

Shahid uncle is always there to offer Zain his practical advice in order to win Zoya. Zoya makes another attempt to stop Zain from marrying her but she herself is moved when Zain promises to allow her to study after marriage. Still, she regards his promises as fragile. Fauzia openly criticizes Zoya claiming that the girl lacks the traditional girlish qualities.

Qamar-un-Nisa pays a surprise visit to Zoya’s house at Fauzia’s suggestion to investigate the family. Zoya presents her conditions for marriage in written form and he signs them without reading them. When no one takes Fauzia’s reservations seriously, she asks Zain to refuse the proposal.

Both families prepare for the engagement and Zeb-un-Nisa assures Furqan of her love for Zain. The engagement takes place at last and Zain’s family wishes for an early marriage.

Billu discovers the contract signed by Zain to win Zoya. When Zain shows Zoya his home, it offends Zain’s mother. Zoya later apologizes to Fauzia when the latter goes to meet her. As marriage approaches, Zain starts showering a daily gift for Zoya.

The couple gets married and Zoya starts winning the hearts of the family. Zain is compelled to fulfill the signed conditions. As a result, when Zoya gets ready for the first day in university, it baffles Fauzia and Qamar-un-Nisa.

Fauzia creates a fuss about Zoya’s studies and threatens to leave the kitchen business until Zoya or someone else takes up the responsibilities. It leaves no choice to Zain as he himself jumps in to prepare the breakfast. Billu also starts blackmailing him about the contract.

When Zoya feels her reputation in the family at stake, she threatens to expose the contract to the whole family. Zain confesses his mistake before the family of not letting them know earlier about Zoya’s studies. Despite the domestic difficulties, he determines to stay strong. Qamar-un-Nisa feels unwell and becomes unconscious.

Qamar-un-Nisa recovers and Fauzia once again fumes at Zain as Zoya went to university despite the ill health of the grandmother. Zoya propagates the idea of employing a cook to ease kitchen problems, a notion Fauzia strongly rejects. Zain finds himself hanging between his family and his wife.

Qamar-un-Nisa reminisces about her own wish of studying, back in her childhood days. Zain admits his mistake and terms the marriage a hard task where one finds himself standing between his wife and mother. He is ordered by his mother to prepare food for the family if Zoya does not so. When he starts doing so, all family members come to his help while preparing the food.

Fauzia admits that Zoya has some special abilities as she has put all the men of the family in the kitchen. Zain faces a new test as he has to take Zoya out for shopping once a month according to the agreement. Zoya wins the hearts once again as she buys gifts for all family members and plans to make the traditional sweet dish.

All the family praises the sweet dish made by Zoya but Zian refuses to taste it in order to show his fake dissent t save Zoya working in the kitchen in the future. His sleep is disturbed at night as Zoya has to study. The next day, he is insulted by his boss when he is found sleeping in the office. His suffering continues as he has to work tirelessly in the kitchen. He gets the termination letter from the job as he is found sleeping one more time.

Zain informs Zoya about his lost job but conceals it from the family. The next day, he goes to the beach instead of his job. Billu gets permission for a picnic and spots Zain on the beach. He however keeps his secret in the family. Fauzia teases Shahid for his ultimate servitude before his wife.

Both Zain and Zoya contemplate about the coming days. Zeb-un-Nisa complains about Fauzia’s ill attitude towards her husband. Zain gets offensive when is asked about his job. He later apologizes to Zoya for his behavior. At last, he reveals to the family about his lost job. The family’s response is however shocking for him as they don’t take it too seriously as he had thought. He then feigns a situation before Zoya that he has been kicked out of the home. He does so to get her sympathies. The tensions between Zaib and Fauzia rise once again.

Billu and Shahid try to clear the mess created by Zain. Zoya gets furious at the family for their behavior and then learns the reality. The family then castigates Zain for his lie who later unsuccessfully justifies his position in front of his wife. She then kicks him out of the room.

Fauzia criticizes Zoya’s behavior while Furqan defends his daughter-in-law. Zoya seeks forgiveness from them for her misbehavior. She once again threatens to disclose the marriage contract and does so at last but the paper disclosed turns out to be her result. Things start to normalize between the couple before grandmother assures Zoya of Zain’s true intentions. When enquired by Furqan, Zian reveals the real reason for losing his job which infuriates Fauzia once again.

Zoya’s presence in the kitchen surprises Fauzia while Zain completes her assignment. The birthday party of Zeb-un-Nisa is spoiled when Zoya accidentally drops food on Fauzia’s clothes who reacts furiously by chiding her daughter-in-law. Zain consoles a broken Zoya while Fauzia once again laments her low importance in the family.

Zain continues to suffer for his love as he sacrifices his sleep. Zoya earns praise from the class for getting the highest marks in the assignment Zain had actually prepared. Fauzia continues to make issues out of petty matters. Qamar-un-Nisa advises her to treat Zoya like her own daughter. Shahid too gets a clue of the marriage contract.

Zoya buys her mother-in-law a gift for her continuous hard work in the house whose happiness is short-lived as Zain announces his plan for honeymoon. Zoya clears the atmosphere and Zain’s misunderstanding as well that she indeed wanted the family to go for Umra from Zain’s savings. Fauzia starts to meltdown as she starts to acknowledge Zoya’s kind behavior.

Zain’s parents and grandmother leave for Umrah and he becomes envious of Zoya as Furqan praises her. When Shahid questions Billu about any contract, Zain reveals it taking him into confidence.

The couple goes out for a late-night outing where both enjoy some romantic moments. Zeb-un-Nisa is worried about their all-night absence and vents out her anger once they return.

Zeb-un-Nisa feels the absence of Fauzia as she manages the house chores while Zoya tries to help her out. Zain complains about getting no attention from Zoya. Both argue where he leaves Zoya on the road. Zain apologizes to her when she returns home. Zoya is surprised to see her mother when the rest of the family returns home.

Zoya’s mother senses something wrong between the couple but both assure her of everything fine. Fauzia apologizes to Zoya for her previous behavior. Zain’s efforts to assuage his wife go in vain. Zain starts misbehaving everyone when Billu reveals the resentment between the couple to Fauzia. Zoya faces embarrassment in the class when he does not submit her fee.

Zoya consoles a shattered Fauzia after Zain bursts out at his parents and accuses them of interference in his private life. The relationship between him and the rest of the family intensifies as Shahid & Zoya blame him for wrongdoing. Billu’s birthday celebrations go on and all the family purposefully ignores Zain.

Fauzia orders Zain to leave the house when he argues with the whole family for disturbing his sleep. Zoya too plans to go with him. Zain’s family stays cold-hearted when he really leaves the house. The couple shifts to a hotel and plans the next move. Zoya shifts to her mother’s home as Zain’s friend betrays and refuses to provide him a stay.

Zoya does not let enter Zain her house and he waits on the lawn. At last, he gets the entry into the house. On the other hand, Fauzia is worried about Zain’s absence.

Zoya constantly pushes Zain to ask forgiveness from his mother. Zain is irritated to know that his family is missing Zoya instead of him. Qamar-un-Nisa and Billu visit them and Zain complains to his grandmother for kicking him out.