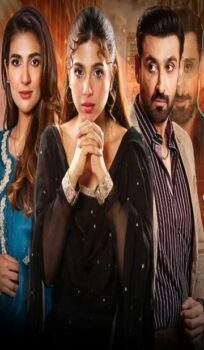 Below is the episode-wise story of the drama ‘Tinkay Ka Sahara’. First, let’s look at the characters played by the cast:

Qadr is a helpless, orphan girl who has been living at her married sister Rumana’s house ever since the death of her parents. Rumana’s mother-in-law despises Qadr and wants to get rid of her as soon as possible. She finds a sloppy, jobless boy Hammad for Qadr and ties their knot after finalizing a deal that no dowry shall be given. Hammad’s mother is a widowed woman dependent on the earnings of her other son. Her daughter-in-law keeps taunting her for having a useless younger son who sleeps all day long and does not earn a penny. Durriya is an avaricious girl who aspires to become rich by marrying a boy from an affluent family. Wasay is a wealthy and angry young man notorious for his bad temper. His sister meets Durriya and sends Wasay’s proposal to her. Durriya’s father hesitates to accept the proposal but after Durriya’s insistence on marrying Wasay despite the odds, he agrees to hitch her to him.

Durriya’s father, Manzoor gets devastated after witnessing Wasay’s rude behavior at the engagement ceremony. He insists Durriya call off the engagement but she remains adamant about marrying Wasay due to her temptation for his big car and luxurious mansion. Wasay’s sister, Adeela instructs him not to be charmed by Durriya’s beauty, instigating him to keep up his harsh attitude. On the wedding night, she brainwashes Wasay that Durriya supported her friends instead of him during a wedding ritual. This outrages him and he slaps Durriya for humiliating him. A moment later, his anger subsides upon seeing his bride cry and he apologizes to her for being harsh. Qadr and Hammad get married in an intimate setting. On the wedding night, Hammad’s mother interrupts them, scolding Hammad for not performing a trivial household chore. When Hammad tries to argue, she humiliates him for being penniless, making Qadr realize that she will be treated as worthless as her husband.

Adeela’s husband, Imran warns her that once Durriya gains control over Wasay, they will be compelled to leave the house. To keep Durriya from revealing the truth to her parents, Wasay gifts her a brand-new car and asks her to flaunt it in front of her relatives to make them envious. Durriya feels humiliated after her parents are labeled as poor and deprived. Despite Wasay’s warning, she cries in front of her parents, regretting not listening to them before. However, her mother suppresses her emotions, asking her to accept her fate. Qadr starts working as a maid from the next day of her marriage and transforms the messy house squeaky clean. Her sister-in-law, Aiman starts ruling on her, making her realize that the house is run by her husband’s earnings. Qadr feels embarrassed and requests Hammad to find work but he shamelessly turns a deaf ear to her.

Adeela uses reverse psychology to manipulate Wasay against Durriya which results in him mistreating his wife. Bewildered, Durriya asks Adeela for advice to handle Wasay’s temper. Adeela suggests she adapt to Wasay’s nature and keep trying to please him. Soon, the family finds out that Durriya is expecting. Wasay swells with joy and pampers her with love and care. Following her request, he takes Durriya to her parent’s house. There, he burns with jealousy upon seeing Durriya’s frankness with her cousin Salman. Furious, he slaps Durriya in front of everyone, pushing her onto the floor. Qadr’s neighbor praises her for her excellent cooking skills and places an order for an event. Eventually, this turns into a catering business and Qadr starts receiving major orders. She insists Hammad help her fulfill them and together the couple starts making money, earning respect in the family.