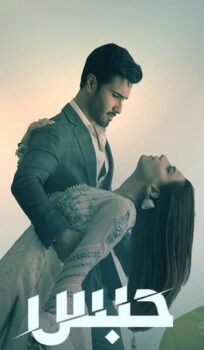 Below is the episode-wise story of the drama ‘Habbs’. First, let’s look at the characters played by the cast:

The episode begins with Ayesha receiving a gold medal from her university due to her splendid academic performance. She belongs to a lower-middle-class family and has two sisters. Her elder sister, Bano is the breadwinner of the family and her younger sister, Zoya is a college-going girl. Her mother is a shrewish woman and has to bear her unmarried sister-in-law, Bobby. Bano loves her cousin, Talal and they want to get married but Bano’s mother is against their marriage and she selfishly wants Bano to keep earning for the family. Finally, Bano takes a stand for herself and decides to marry Talal whatsoever. As a result, Ayesha is forced to discontinue her studies and look for a job to support the family. She is seen hopping from place to place to land a decent job. Basit is a sober guy who belongs to a high-class family. His mother left him with his father during his childhood after she got involved with another man which is why Basit does not believe in marriage. His father has died of cancer and left a will that will only be valid if Basit marries.

For the fourth time, Talal arrives with his mother, Shamsa at Bano’s house to ask for Bano’s hand in marriage. Bano’s mother, Qudsia takes the opportunity to humiliate Shamsa for wanting to make an independent, working lady her daughter-in-law. Surprisingly, Bobby takes Qudsia’s side and together they engage with Talal and Shamsa in a bitter conversation forcing them to leave in a fury. Later, Bano and Talal decide to marry secretly as that is the only way Bano can rid herself of her selfish mother. While struggling to get a job, Ayesha discovers a job vacancy at Basit’s office and arrives there for an interview. Basit is worried that his business will be doomed if he does not marry a girl as soon as possible. So, he meets with Soha, his late father’s friend’s daughter to talk about their views on marriage. Soha is a very modern and confident girl who isn’t shy about talking to her prospective groom.

During a meeting with Soha, Basit makes it clear that loyalty means everything to him in a relationship. But things get complicated when a male friend of Soha bumps into her and she meets him warmly by hugging him in front of Basit. Later, seeing Basit in a perplexed state, his friend, Fahad advises him to give himself and Soha some time to develop a connection. However, having no other choice but to save his business from falling apart, Basit proposes Soha and she takes some time to think over the matter. Qudsia discovers Bano’s secret plan of marrying Talal and goes straight to Talal’s mother to blow the gaff. Shamsa strictly prohibits Talal from marrying Bano and later plays a façade of fainting to keep Talal occupied. Bano keeps waiting for Talal in the marriage court and is heartbroken when Talal refuses to marry her. Ayesha catches her younger sister, Zoya having a lunch date with a guy and drags her to the house angrily.