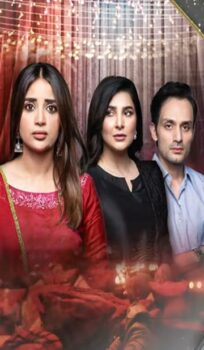 Below is the episode-wise story of the drama ‘Nehar’. First, let’s look at the characters played by the cast:

The drama starts with a girl dying in a hospital after she is fed poison by her in-laws. Turns out, Mazhar was her husband. Now Mazhar and his mother are preparing to flee away with the dowry that they received at the time of marriage. Anmol is a cheerful and energetic girl who jumps with excitement after passing her exams. Komal, Anmol’s elder sister, is a very mature and calm girl engaged to her cousin, Arsalan. Adeel, Anmol’s maternal cousin is brought up in her house after his parents died when he was very young. Growing up together, Anmol and Adeel have developed feelings for each other. Erum is Arsalan’s younger sister and she envies Anmol seeing Adeel’s fondness for her. Ghazala is worried about her daughter, Komal and she insists on her husband, Kabir to talk to her sister regarding Komal and Arsalan’s wedding. Arsalan is not in favor of marrying Komal and soon their wedding is called off.

Anmol is worried seeing her father’s desperation to get her and Komal married as soon as possible. The next day, Mazhar and his mother, Ishrat arrive at their house with a marriage proposal for Komal. They fool Ghazala and Kabir with a persona of being righteous and honored individuals. Kabir is highly impressed with Mazhar and wants to marry off Komal quickly. Ishrat is overjoyed that she will retrieve a considerable amount of dowry from Kabir. Despite her parents’ reluctance, Anmol signs up for the Master’s program and assures her parents that she will do whatever they want once her degree is completed. On Komal’s wedding day, Ishrat arrives at the house and slanders Kabir for sending low-class furniture in dowry. Moreover, she demands to gift Mazhar a car or else she won’t allow the marriage to happen. After a huge struggle and through Adeel’s help, Kabir manages to buy a car on loan. The Nikah ceremony finally takes place but Ishrat refuses to take Komal with her as she is offended by the small car that was gifted to Mazhar.

Kabir and Ghazala beg Ishrat for Komal’s rukhsati but Ishrat turns a deaf ear to them. Before leaving, she gives Kabir an ultimatum to get a large-sized, lavish car for Mazhar if he wants to keep his daughter’s marriage intact. Arsalan’s mother, Zohra goes on with slapping Kabir and Ghazala in the face for marrying off their daughter in a haste. Kabir feels ashamed in front of Komal for setting her up in a greedy family. Through Adeel’s friend, Kabir manages to buy a luxurious car in installments and asks Ghazala to inform Ishrat about it. When Ghazala calls Ishrat to tell her about the arrangement, Ishrat demands to see the car first to ensure that it is up to Mazhar’s standards. Arsalan salivates seeing the expensive car and asks his mother to hatch a plot to call off Komal’s marriage so that he can marry her and gain the car.

Mazhar goes to the showroom to inspect the car and instantly likes it. At night, he along with his mother and his sister, Mehwish arrives at Kabir’s house to take Komal. Ishrat humiliates Ghazala for arranging the rukhsati ceremony at home instead of a hotel. After the rukhsati, she strips all of Komal’s jewelry on their way home. As soon as Komal steps foot in her in-law’s house, Ishrat starts treating her like a maid. The next morning, Anmol and her family are all set to take breakfast for Komal and her in-laws. But before they could leave, Zohra takes the opportunity to slander Anmol for her endearment towards Adeel. After Arsalan’s plan to call off Komal’s marriage fails, he asks his mother to take his proposal for Anmol. Meanwhile, seeing Adeel and Anmol’s closeness, Ghazala talks to Adeel to know his intentions for Anmol and is relieved to find out that Adeel loves Anmol and wants to marry her at all costs.

Ishrat snatches all the gifts from Komal that she received at her wedding along with her personal cellphone. Later, she accuses Komal of being a rude and outspoken daughter-in-law and instructs Mazhar to suppress her. When Ghazala invites Komal and Mazhar over for dinner, Ishrat restrains Mazhar from taking the car and asks him to blame Kabir for gifting him a dud car. At the dinner, Komal’s entire family is taken aback by Mazhar’s niggard attitude. Komal asks her mother to set Anmol up with Adeel as soon as possible as she does not want her little sister to suffer the hardships like her. Zohra is unclear whether or not she should ask Kabir for Anmol’s hand in marriage. Erum indoctrinates her to do so immediately as it will pave the path for her marriage with Adeel to occur. After having a horrible experience of marrying off Komal to an unknown family, Kabir instantly agrees to Arsalan’s proposal for Anmol and Erum’s proposal for Adeel.

Anmol begs her mother to take action and ask Kabir to reject Arsalan’s proposal. Adeel asks Ghazala to talk to Kabir about his desire to marry Anmol. When Ghazala asks Kabir to consider Adeel for Anmol, Kabir bursts onto her like a volcano and instantly refuses this inkling. According to Kabir, if Adeel marries Anmol, people will poke fun at him for fostering Adeel for his own benefit. Mazhar asks Komal to demand a heavy sum of money from her father so that he can initiate his own start-up and drops her at her parent’s house. Seeing the havoc at her house, Komal feels embarrassed to ask her father to entertain Mazhar’s demands. She returns to her in-laws herself and upon knowing that she has come empty-handed, Mazhar shuts the door on her face.