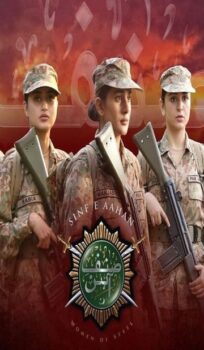 Below is the episode-wise story of the drama ‘Sinf-e-Aahan’. First, let’s look at the characters played by the cast:

The story begins with the introduction of Pariwesh who belongs to a poor family of a tribe. Her father’s land is mortgaged to a chief of the tribe. The debt can be released if Pariwesh gets married to any servant of the tribe but she wants to join the army. Arzoo too belongs to a poor Christian family living on rent in a man’s house who flirts and passes time with her. He keeps degrading her for poor living conditions and makes fun of her as she gets an offer to teach English in the army.

Mahjabeen belongs to an elite family with parents having extreme issues that reflect her weird personality. She wishes to take an army test as her mother challenges her abilities. Shaista is a bright girl living in Khyber Pakhtunkhwa who wishes to join the army but her father is against it. She plans to take the test keeping it hidden from her father.

Rabia Safeer had been a topper of the institute and blames her parents for keeping her at home for two years in an attempt to get her married. She wishes to join the army as well and argues with her parents about the same.

Shaista secretly goes to take an army test hiding from her family with her cousin. Both of them are able to clear the test. Pariwesh too clears her test and somehow convinces her father who agrees to let her join the army. Mahjabeen is happy to clear her test but annoyed at the thought of sharing a room with other girls due to her elite and comfortable background. Rabia passes the exam but is restricted by her parents from joining the army. She is sad but receives support from her brother who is also in the army. Arzoo understands that Noraiz is cheating on her and feels bad for herself. She cries due to her poor situation and considers not having any self-respect. She waits for the result of the army’s test. Shaista’s fiance secretly makes her catch the train to reach the academy as he supports the decision of making a career. The rest of the girls too face their own troubles but can’t stay back from achieving their dream.

Shaista and her fiance spend some time providing entertainment to the audience because of their conversation. All the girls arrive at the army center to clear their final test. Shaista’s mother is informed about her courageous step but the father remains unaware. Mahjabeen befriends Shaista and gives her new shoes as Shaista loses her money. Rabia and Pariwesh bond instantly. Arzoo too shares a beautiful bond with another girl, Syeda Sidra. Mahjabeen’s mother is least concerned about where her daughter went and keeps herself focused on technology. It is revealed that Mahjabeen and Rabia were once close friends but became bitter enemies after Rabia failed to arrange her brother’s marriage with Mahjabeen as Mahjabeen’s cousin, Kamil was also interested in her. The test takes place before a running test which the girls find difficult to complete within the allotted time.

Mahjabeen wishes for Rabia’s insult during the physical tests but faces failure herself when she loses her breath and is unable to score well. Pariwesh and Sidra are disheartened when they too face difficulty in completing the tasks. Rabia has a fear of heights and falls down during a task, pleasing Mahjabeen. The girls take the interview revealing their characteristics, strengths, and weaknesses wondering about the realities of their lives. Shaista’s father is enraged to find her gone and reaches Gujranwala to kill her and her fiance, Kamil who had helped her. Kamil tries to convince him regarding the importance of Shaista’s dreams. The girls are selected for the army and Shaista’s father gives his blessings to her. Mahjabeen doesn’t share the news as she listens to her parents quarreling again. Pariwesh’s parents become happy at her progress.

Shaista’s grandmother is not happy for her but her uncle is surprised and congratulates her for the big achievement his own son failed to gain. Everyone is elated as the neighbors congratulate her father and he can not be more proud. Arzoo meets Noraiz who acts rude to her and asks her to make a choice between him and the army. Rabia enjoys dinner of success with her family. Mahjabeen packs heels for her stay in the army. She finds an old picture and reminisces about her lovely days with Rabia and Daniyal. It turns out that Rabia wanted her brother Daniyal to marry Mahjabeen who too had feelings for him. Shaista’s grandmother finally blesses her as she leaves to take the final army test. Noraiz’s parents come to Arzoo’s house and she thinks it’s for marriage. Her parents are disappointed to learn that Noraiz never talked about her at his home.

Pariwesh’s family faces backlash as she joins the army. Women try to taunt her mother but receive a befitting reply. A Sri Lankan family is shown. The father was from Sri Lanka who was martyred serving in the Pakistani army. His daughter, Perrera serves in the Sri Lankan and wishes to find a man named Colonel Mujahid who was her father’s friend. She leaves Sri Lanka to reach Kakul to join the other ladies and find her father’s friend. She is employed at the station in Pakistan for six months to start her search. All girls leave for the Pakistan Army’s training center and are mesmerized to see its grandeur. Captain Usama, married with a child, is the course commander of the girls. His wife is to start teaching at an army school. Shaista and Mahjabeen’s parents meet each other and make conversation. Rabia comes with her brother who advises her not to let her rivalry with Mahjabeen affect her performance. Usama passes the message of Pariwesh’s father, Jamal to his seniors. Jamal receives a protocol and accepts Pariwesh’s decision wholeheartedly.

The parents come to drop off their children at the academy. Mahjabeen’s mother is concerned as she eats a variety of food and inquires about the same from the authorities. Shaista’s parents are concerned as she is the first child of the family to go out. The authorities satisfy the girls and start their training. The senior officer admonishes Mahjabeen for chewing gum. She is insulted terribly and so is Rabia as she walks slowly. The girls are treated strictly and are allotted rooms after the inspection of their luggage. Mahjabeen’s makeup is taken and she is warned to tie her hair. She cries but bears it all. Perrera arrives and shares a room with Arzoo. Sidra is scolded as she decorates her room with fairy lights. Mahjabeen faces another backlash when she locks her room and is told to revise the rules.

Mahjabeen intends to leave the academy, PMA. Sargent Shehryar is chosen to teach the cadets about living in the PMA for the next six months. He unveils to them the strict rules of living in PMA with discipline and responsibility. He also teaches them the order of mess and that a meal starts and ends with the senior. The girls return with an empty stomach. Rabia is awarded the position of SLC, who is responsible for the parade during the course activities. The platoon Commander calls Mahjabeen and advises her that leaving PMA would give her the title ‘loser’. Major Samia visits her sick son in the hospital. Rabia and Pariwesh get in trouble for not waking up their roommates, Shaista and Mahjabeen for P.T. Mahjabeen is asked to sing the national anthem but she doesn’t know it. Strict exercise routine follows including one mile running and stretches. Pariwesh gets injured during the running.