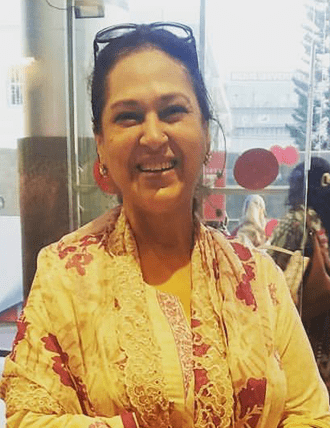 Ismat Zaidi is a veteran Pakistani TV actress. She was born on 21st Jan 1960 in Sheikhupura. Her father Hassan Zaki Kazmi worked in Radio Pakistan. He then joined BBC London and the family had to move to London.

Ismat completed her O-Levels from London and worked at Barclay’s Bank for a brief period. She then married a PIA pilot in 1979 but had to endure a separation in 1995. She has a son and a daughter.

Ismat’s professional career on TV started with the drama Umeed-e-Seher. Since then, she has acted in numerous dramas. Some of her recent popular dramas include Meri Zaat Zarra-e-Benishan,  Ishq Zahe Naseeb, Deewangi, and Meherposh.