6 Korean Dramas to Watch in December 2020 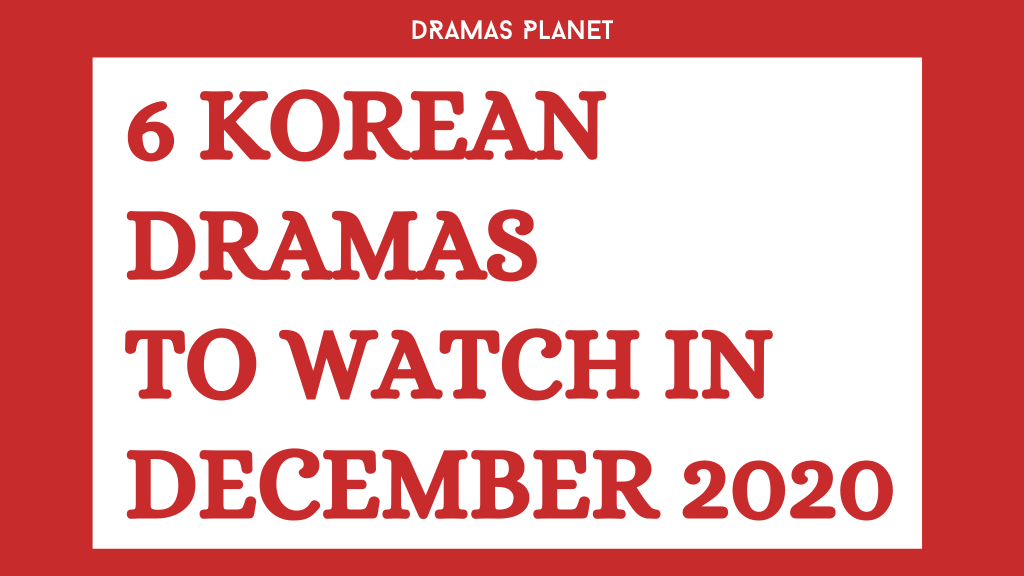 6 Korean Dramas to Watch in December 2020

Well, the wait is over, a new month is starting and a new bundle of dramas is on its way with exciting stories never heard before. Ah, a delight for the heart and joy for the fans! Every day is spent eagerly once a drama ends. It is because everybody keeps waiting for a new plot to begin a new journey in the K-drama world. December brings with it a bang of new stories. Let us take a look at the upcoming dramas of December.

A high school student, ImJoo-Kyeong, considered to be the goddess because of her make up skills is petrified when her handsome schoolmate, Lee Soo-Ho, sees her bare face. They both gradually fall in love as Im heals the wounds of Lee’s dark and he helps her develop confidence in her inner beauty.

The love birds are disturbed often by another handsome hunk Han Seo-jun. The rise of romance between three young students might be interesting. You may want to see how the girl ends up with her meant to be. Did she have any feelings for the other guy? What is Soo-Ho’s history? Is there anyone else who has feelings for him? Stay tuned to find out.

A divorce lawyer, Han Woo-sun, who often gets touchy about his work gets involved in comical and romantic scenes with his wife, Kang Yeo-Joo, a mystery criminal novel writer. She always kills the unfaithful men in her novels. She believes a cheater must die. Is this a hint that she might face something like this in her own life? The couple also has some friends who hide their true personalities. Who are they? What is the actual story behind the one being shown?

A veteran newspaper reporter Han Joon-Hyeokstarts aims to fight for justice but turmoil in his life causes him to divert from his path. He tries his best to complete responsibilities as a father and husband but fails. If he is married then what is the role of Im Yoon-ah? Is she going to be the reason for a change in Han’s life? Is she going to come to the middle of his marriage? Or can it be that she herself is the wife of Han? The drama will also help you dig deeper into the troublesome and burdensome life of the office workers.

A handsome former sprinter, Ki Sun-Gyeom is trying to become a sports agent and meets a girl, Oh Mi-Joo. She works as a subtitle translator for movies. The story shows how two completely opposite people fall in love. The other main lead involves a vicious and dedicated rich CEO, Seo Dan-A of a sports agency. Lee Young-Hwa enters her life whose main love is drawing and sports.

The story is not as simple as it seems especially when it’s the road of love. Probably the paths of Sun-Gyeom and Dan-A will cross considering their similar interest in sports. This can cause tension between him and his girl and jealousy might take a peak. What if troubles between the couple cause Mi-joo to turn to Young-hwa for solace. This might be heartbreaking and interesting to see how destiny unites those who are meant to be together.

Let’s dig into history. By the end of the Joseon era, Sung Yi-Gyeom tops the exam to become a researcher but he fails to recognize his aim in life. When he is caught gambling, he is given the punishment to work secretly as a royal inspector with two team members. One is Hong Da-In, a female inspector, and Park Chun-Sam, his loving and emotional servant. His great opposer is his stepbrother who is hated by their father. The sole reason why he has to face his stepbrother’s hatred is their father’s anger at him as his brother’s mother belongs to the low class.

How will he mend his relations with his brother? Are any troubles waiting for him? If yes, who is behind all the chaos? How will he fight injustice happening to people? Among all this, will the audience be able to see love blooming between the two team members? Let’s wait for the drama!

Well, this drama has three main leads so you may have to watch it with an active brain to understand everything. A happily married couple for three years, a lawyer Pan Sa Hyun and Boo Hye Ryung have no children. A sweet relationship between the director of the neuropsychiatry department Yoo Shin with his dedicated wife and loving mother of his children, Sa Pi Young.

Another story follows that of a divorcee Chinese translator Song Won. A happy supportive couple married for thirty years are grateful to each other as Lee Si Eun, the writer of a radio show always stood by her husband Park HaeRyoon who is now the theatre department’s dean. This drama will unfold some secrets the couple might be hiding from each other.

Is everyone really happy or do they have some beans to be spilled of their own? Is there anything mysterious for the audience? The ride of marriage is never easy. Who knows what we might be able to discover this time? Are the lives of all couples somehow connected to each other as well? Something is fishy but all queries will be cleared once we watch the show!

Well, well! Aren’t the plots super exciting? These dramas are going to give the best of time in December for sure. Everyone is waiting eagerly to find out what is going to happen or how the story will be followed. We have to wait patiently cause in the end it is going to be worth it. After all, it is the K-dramas that we are talking about. Stay tuned and do not miss any updates regarding this industry.