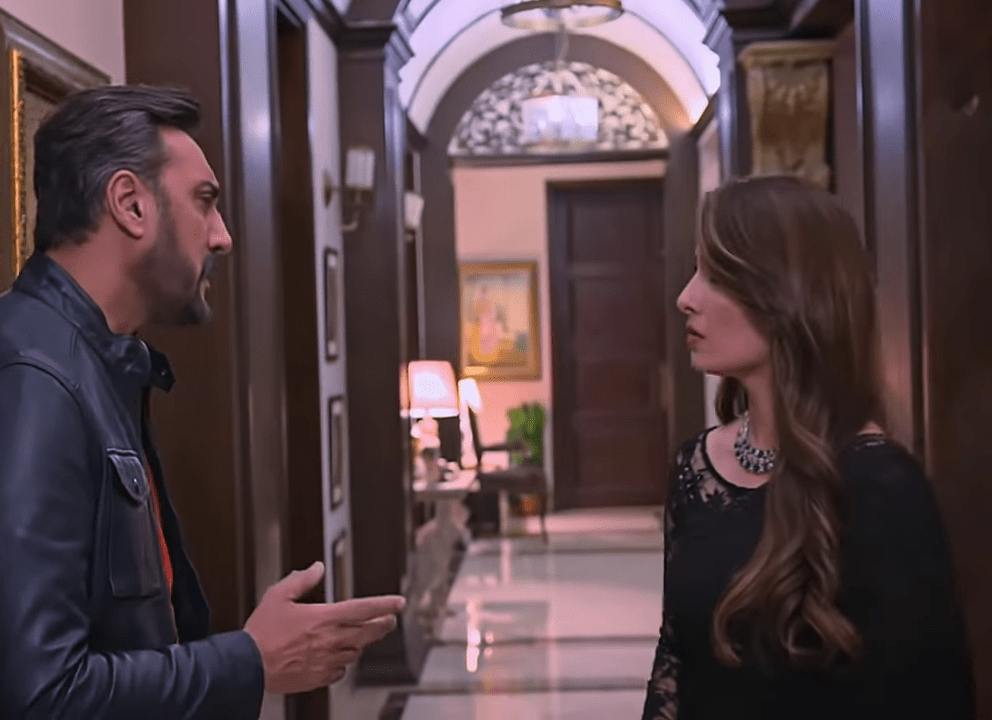 After deciding to have a prosperous life and to part ways with honesty, let’s find will the couple be able to find peace or not. What impact Shewaar will have on their lives. Let’s discover all the happenings of ‘Mere Paas Tum Ho’ episode 5.

Danish finds it hard to find peace with illegal money in possession. The next day, he shocks everyone by refusing the contractor’s illegal offer and returning the money. Shewaar hosts the family on dinner and entices Mehwish with all pleasures and joys of an affluent life.

Danish is unable to sleep and is restless at night fearing that someone will steal the money. Since they have money now, they plan to buy the car from Monty. Through midnight, Mehwish demands her husband to go to Monty and convince him for selling his car. He insists on locking the door before leaving. Monty astounds to learn that Danish is willing to purchase the vehicle by offering him 9 lakh now and 3 lakh next month. When Monty talks rough about Mehwish, Danish becomes angry and leaves him behind abandoning his intention of buying a car from him. Mehwish is disappointed knowing Danish has not been able to make a deal.

In the morning, Danish gets late from the office. Shewaar calls Mehwish thinking Danish will be out for office but she is not ready to talk to him in her husband’s presence. She lies about the call and proposes Danish to deposit money in the bank. Later, Shewaar again phones Mehwish, this time she picks it and he discusses his domestic routine. He is curious to know Danish’s response over his phone call but she does not respond to the query.

On his way to the bank, Boss asks Danish over the phone to sign the contractor’s file. Danish argues over non-completion of the road but learns he has no other way instead of signing it or returning the money. Now, seeing the poor condition of road, he is again confused. His conscience again comes to haunt him and he returns the kickback. Boss pretends to be proud of his decision.

After some time, Shewaar calls Mehwish for the third time in a day and flatters her. He again investigates Danish’s attitude towards her emotions and feelings. Mehwish seems happy to talk to him. Danish comes early and informs her about the return of money. Her delight fades knowing reality and she is again back to the ground realities. Danish visualizes a happy life with his wife and child and that they will be satisfied in the present situation, a notion Mehwish rejects and is furious now.

Later, Mehwish mesmerizes Danish when she gets ready for dinner. Shewaar impatiently waits for the family; indeed Mehwish and soothes himself with alcohol.  After their arrival, Shewaar is grieved to recollect his bitter marital relationship. He learns more about the couple: their love story, proposal and then marriage. Mehwish wishes to see the theater room and Shewaar gets a chance to be alone with her. He hints to give all his wealth to Danish in exchange for Mehwish. She is flabbergasted at the boast.

Dinner starts and Shewaar’s conversation is full of innuendos pointing towards Mehwish’s beauty. Shewaar and Danish both term each other successful. Danish thinks him successful because of his good fortune and Shewaar thinks Danish is in possession of something very precious. Then, Shewaar sends him away tactfully. After his departure, Shewaar degrades him and mocks him for his poverty before his wife. He thinks Danish has exploited her and has nothing to give her. Mehwish tries to divert his attention to his married life. He reveals more about his wife that she is only interested in profit and loss and there remains no affection between them.

Shewaar’s vaunt continues as he talks about his family traditions of feeding others and giving his guests expensive gifts. Moreover, he tries to impress Mehwish with the fact that his wife has the privilege of visiting world cities like New York and Toronto.  After that, he entertains the family with flute and presents himself as a mournful soul. When they depart, he farewells them all with costly gifts.

That was all from the story of ‘Mere Paas Tum Ho’ episode 5.

We come to know the authority and power of Mehwish over Danish. She influences him to accept money. Then, she demands to go to the neighborhood to find about the car. Danish is so obedient to fulfill her wish even through the midnight. On the other hand, Mehwish is so careless about him that she does not bother to lock the door as her husband desires. She is only concerned about the car right now so that they will be able to go to dinner in their own car. Moreover, she is more interested in dress selection for the event and does not care what is going on in her husband’s conscience.

Both characters are contrasted beautifully. She becomes more and more interested in Shewaar’s personality and has started to deceive her husband when she lies about Shewaar’s call. Though she is aware of the entire plot Shewaar produces of sending Danish away, she does not mind it. She is also unruffled when Shewaar degrades her husband. And she is obviously in a new world to have a precious necklace gift.

Shewaar is all the way ready to impress Mehwish. First, he tries to assess Mehwish’s response towards him and finding it positive goes ahead. His show of lavishness at dinner is an attempt to persuade Mehwish to turn her attention towards him and he seems working on his plan diligently. It is evident that all the enticement has worked for him.

Danish’s sense of morality is back for one more time. This time, he does not hesitate to act upon the voice of his conscience. We see him torn between two extremes. When he is in office, his morality is at its peak, but when he is involved in domestic matters, his integrity begins to totter. At dinner, although he perceives something wrong but looks indecisive at the moment.

Though this episode was a little bit slow but still some parts need to be viewed. Danish’s uneasiness and panic after having money, Shewaar hinting Mehwish a possible relationship are some scenes that need your attention.